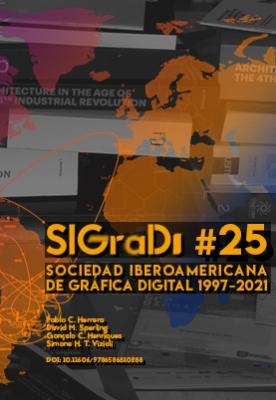 "...This cartography was woven through five gestures.

The first was the retrieval of a significant volume of information available in physical and digital Annals, personal files of its historical members, and in databases. Here, the enormous collective energy that was placed by many people in favour of the construction of SIGraDi can be seen. More than 2,800 articles were published and presented in more than 1,000 hours of face-to-face and remote activities, bringing together researchers from Ibero-American and sister societies, and an estimated audience of more than 4,000 people over 25 years.

The second gesture was to make a public call for members to send, through “written memories”, the most significant experiences during their involvement with the Society. In these texts, which range from factual reports and chronologies to informal and more subjective reports, another scale of approach is presented, that of the subjects and their personal experiences. Through these accounts, each congress becomes unique.

The third gesture was also a public call for the Society's members to share “visual memories”, the experiences recorded in photographs of the events they participated, which contributed to the expansion of an imagery record base of the history of SIGraDi, to be continuously expanded and systematized. In these images, in the foreground, human warmth and affection are evident, as characteristics noticeable by those who arrive and are soon welcomed. In passing, we must highlight the lively cultural and social events as a trademark.

The fourth was to capture a set of objects and materials from the congresses, which make up a true “graphic collection” of their thematic singularities, as well as testimony of the technological transformations the SIGraDi community has undergone in two and a half decades.

Finally, the fifth and last gesture was to configure and link all the collected material. The analogy we use is that of a rope made from the intertwining of many strands. Moreover, such threads appear in this book in the form of "timelines", made of raw materials as diverse as reports, data, events, keywords and images, which lead us to different ways of telling stories, and anticipate possible trends. Normally associated with temporal chronologies, the time lines here suggest and equally potentiate other readings, which concern synchronicities, correlations and inferences between the near and the far. Therefore, the book can be read both linearly and in leaps, connecting reports-data- events-keywords-images.

About the organization of the book, at first, the reader finds the collection of graphic materials and objects from the congresses, the technical data of the publication, the presentation text that they can read at that moment and the map of territorialisation of societies that share the same interests as SIGraDi. In the next section, Written Memories, reports from community members who responded to the call are presented organized by the year of their first participation in the congresses, between 1997 and 2020 and, each year, in alphabetical order, in a distributed horizontal network.

In (Dis)placements, the cities and the list of academic institutions where the congresses were organized are presented on a world map that adopts the Gall-Peters Projection.

Contrary to Mercator's projection, the chosen projection maintains the proportion between the areas of countries and continents, repositioning traditional geographic perspectives from the northern hemisphere. It is noteworthy that over these 25 years, SIGraDi has travelled 76,138 kilometres between 21 cities in 10 countries, which is equivalent to almost two laps of the Earth around the equatorial circle!

Then, a set of graphic timelines retrieve and synthesize data related to SIGraDi's events and management, starting with the evolution of its graphic identity.

The Timeline – Congresses presents the evolution of the covers of the Annals of each congress, the host cities and universities, their dates, Local Organizing Committees and guest speakers. It is accompanied by the Arturo Montagú awards, granted since 2005 to people with a recognized career in the Society. This is followed by the awards for the best written and presentation work awarded since 1997 and, finally, the Ph.D. Workshop award, awarded since 2013. The exhibitions and their organizers, workshops and their lecturers are included, in addition to the number of articles published in each congress.

In Timeline – Management, the members of the International Executive Committee, substitute members and year-on-year Advisory Committee, the editorial teams of the journals International Journal of Architectural Computing (IJAC) since 2003 and "Gestão & Tecnologia de Projetos” (Management of Technology & Projects) since 2016, in addition to the special editorial projects of 2006, 2013 and 2021.

Languages, which historically constitute one of the cultural identities of our society, are the object of a prospective analysis, with graphics, crossing data identified in the CumInCAD (Cumulative Index about publications in Computer Aided Architectural Design) and CumInCAD.es / ITC (Digital library of Construction Informatics and Information Technology in Civil Engineering and Construction), with records of the chairs of the congresses.

In Timeline – Keywords and Authors, information is retrieved regarding the keywords most used in congress articles, correlated with the most referenced authors, and the evolution of these words until the year 2020.

The set of timelines clearly exposes the expansion of the scope of the congresses, with the incorporation of a diversity of themes, expansion of the number of published articles, workshops and exhibitions, in addition to editorial actions and joint initiatives with sister societies.

Finally, photographic images that document the congresses over the years capture intense collective moments in society. Among the many records we have received, which will constitute an archive that constantly being updated, we seek to privilege images that focus as broadly as possible on the spectrum of each event.

We know that a collective memory recovery project like this is born destined to be full of absences. In addition, that editing and curation actions work from concrete materials seeking to build connection of meaning. We hope that this contribution built collectively as a historical cartography remains open to fill in gaps and new challenges, with a long- awaited update and constant update from the SIGraDi community, because without you this would not be possible.

On behalf of SIGraDi, we thank everyone who has contributed to this vibrant and inspiring journey. 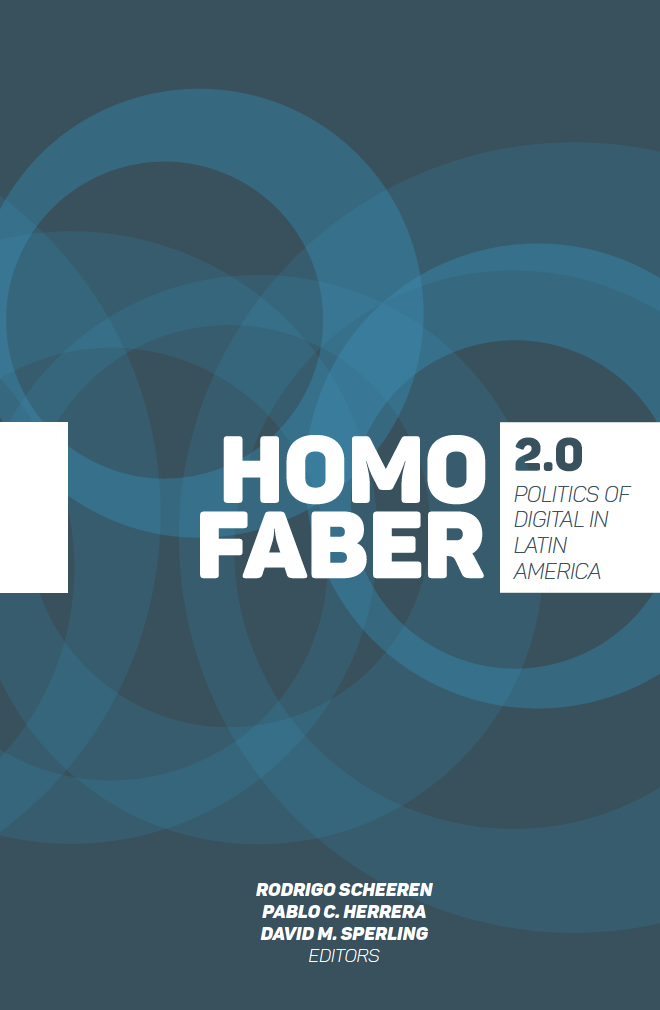 Two decades have passed since the implementation, diffusion, and development of the use of digital fabrication in the areas of Computer-Aided Architecture Design (CAAD) in Latin America. Throughout this period, different temporalities and specificities in the region became noticeable. The first opportunity to capture and understand a part of this process happened during the CAAD Futures 2015 Conference – “The next city”. From the initiative sponsored by professor Gabriela Celani (UNICAMP), professors David M. Sperling (USP) and Pablo C. Herrera (UPC) organized the exhibition “Homo Faber: Digital Fabrication in Latin America”, which presented works from 24 consolidated and emerging laboratories from six South American countries that had been created between 2005 and 2014.

“Homo Faber 1.0” – how we call it – demonstrated for the first time to the world the potential of digital fabrication in Latin America. Conceived around the subject “Informing Materials and Materializing Forms” (Sperling and Herrera, 2015), this exhibition represented, until that date, the main effort to systematize, categorize and present processes and dynamics of digital fabrication in the fields of architecture, design, and construction.

In the context of the XXII Congress of the Iberoamerican Society of Digital Graphics (SIGraDi / São Carlos, Brazil – November 7th to 9th, 2018) that assumes “Technopolitics” as its central theme, Homo Faber 2.0 focuses on the “Politics of Digital in Latin America”.

Montaner and Muxí (2011, p.65-66)* argue that “political action from the architecture has always existed, although there are professionals who deny such a relationship and who do politics by omission. If politics is the social organization of a group that is developed in a space, depending on where it is acting in the creation of this space, it will be inclusive or segregating, inclusive or exclusive, will be governed by the aspiration to redistribute quality of life or according to the perpetuation of exclusion and the domain of powers. That is why architecture is always political”. From that approach, digital fabrication in architecture and design is no exception.

The chosen theme for this exhibition demonstrates how some uses of digital fabrication technologies, from their disruptive nature, impose new policies on processes, academic programs, curriculum development, production lines, implementations, and adoptions. Than, the aim of this exhibition is to being bound to politics and society, showing the potential of digital fabrication and its impact on communities, evidencing how the identity of the projects evolves the constant experimentation of form and material for the development of new products or the improvement of existent ones, from the object to the architectural scale.

For Homo Faber 2.0, the organizing committee selected 37 projects from a total of 61 proposals. These projects, coming from nine countries in South and Central America,  were distributed in three categories:

– 12 projects related to design collaboration processes for changes in society with activities aimed at citizens in particular and strategies of subversion in the use of digital technologies.

– 19 projects related to processes and prototypes of conceptual research using formal and material experimentation, as well as the technological development of new techniques and products.

– 6 projects related to artisan-digital hybridism / neocraft / cultural identity that promotes the mixed use of artisanal and digital techniques for the creation of the artifact.

In this edition, Homo Faber reflects a maturation of initiatives that enhance an approach to different scales towards the built environment. The investigated processes and resulted artifacts demonstrate an advance in the complexity of the proposals, scale of manufacturing, technical solutions, and materialities. The projects are largely linked to the local culture, recognized as a source of inspiration generating meaning for the flow of design and assembly. Laboratories arise with proposals increasingly associated with local problems, going from experiences referenced to the northern hemisphere to others that seek in their own reality and community a connection that values their identity.

Therefore, it is important to highlight that through the Homo Faber exhibitions, histories and backgrounds are traced, which will be the daily routine of other initiatives transformed by the reality of each community, city, and country. Finally, in this second version, we look for answers to local problems driven by experiences of not only a laboratory but of different contributions that enrich new digital fabrication policies and politics, not only for their own place but for their cities and the world.

The visibility of projects through Homo Faber demonstrates the opinion of Hans-Ulrich Obrist, for whom an exhibition expresses possibilities of connectivity, of creating bridges and networks between technology, politics and the community, driven by the perspective of the academia and the profession of architecture.